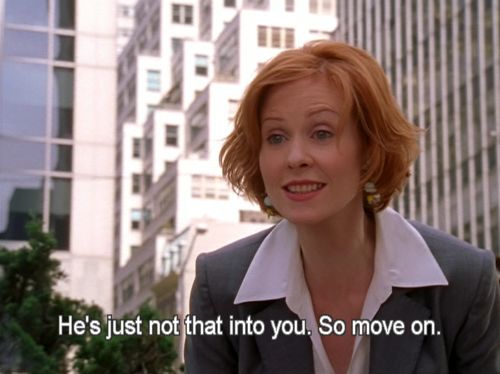 I think we’ve all found ourselves sitting around a table with friends trying to figure out if someone is into us. The answer is simple…if you have to question it, it’s probably not that serious. But incase you don’t see it simply, here are your signs to look for.

Life happens sometimes so give him the opportunity to explain why he didn’t call. Maybe something really did happen this ONE time. If there was no good reason or it happens often, then the truth is, he didn’t call because it wasn’t important.

A guy that really cares about you will have you on his mind. He won’t be able to forget.

Also, in reference to phone calls, he’ll be courteous with them. If he’s running late or needs to cancel plans, he will call and let you know. It take two minutes to send a text or pick up the phone. If he just blows you off and tries calling the next day…don’t even bother answering.

2. He can only see you at certain times or days

I think we’ve all met that person who conveniently is always available late at night. He always has time to watch a movie at his place after a long day, but somehow never has time during the day. I don’t care how busy someone is, if you are important, they will make time. Someone that just calls last minute is not trying hard enough, especially if it is always at night.

3. One of you knows significantly more about the other.

This can work two ways. He knows way more about you than you know about him. This is because you do all the talking. You want to create an amazing bond so you share your life story, but he says nothing about his. Maybe he is hiding something, maybe he doesn’t want to get close, or maybe he’s only interested in the physical. Keeping someone at a distance isn’t going to allow the relationship to grow. There’s your sign.

The second way is the flip side. You know way more about him than he knows about you. He is so interested in talking about himself that he forgets to ask about you. Maybe he just went through a breakup and is missing a companion. So he latched on to you and just wants someone to listen. Maybe he’s just a self-centered narcissist that doesn’t find interest in your thoughts.

Either way, it doesn’t seem good. Let it go.

4. Nobody knows about you or met you

If this isn’t a big red flag, then I don’t know what is. When you care about someone, you want to integrate them into your life. You freely talk to your friends about this exciting new person. It’s not natural to want to hide someone that is important to you. He’s either not sure if you’re the one or he has another one.

5. He doesn’t share details about his day, where he was, or who was with.

I recognize there is a difference between insecurely questioning someone and genuinely caring. Look, I am not a person that likes to question. I  will not badger you with 100 questions about where you are, when you got there, who you will see, what you are eating, how much it cost, who paid for it, and when you will be back. I like freedom just as much as the next. However, I do expect to have general conversations about your day. This is not because I want to stay on top of you. I genuinely care about how your day goes. If I am a part of your life then I care what happens.

If someone doesn’t want to share the details or is short with their answers, there is a reason. Maybe this person is out with other people and doesn’t want you to know. Regardless of why, take it as a sign to start doing your own thing too.

6. There are no plans for the future with you.

Going back to details, if he has none with you, that’s not good. If he tells you that he’s just enjoying right now and doesn’t want to talk about the future, that’s a bad sign. If you have been dating for months, you should be naturally talking about the relationship and where it is heading. If neither one of you are talking about this, maybe you aren’t heading anywhere.

7. You think there is something wrong with you

I guess there really could be something wrong with what you’re doing. But what I’m talking about is when he starts to make you feel like you want too much. You’ve been dating for months now and you’re the needy one for wanting more? That’s not true and you shouldn’t feel bad about wanting to move forward with someone that is important to you.

Don’t fall for this. If you are looking for something serious, don’t settle for someone who is afraid to commit. Let him go. Find someone who calls when he says he will, tells you about his life, introduces you to his friends and family, and talks about the possibility of a future together.

View all posts by CarissaMichelle